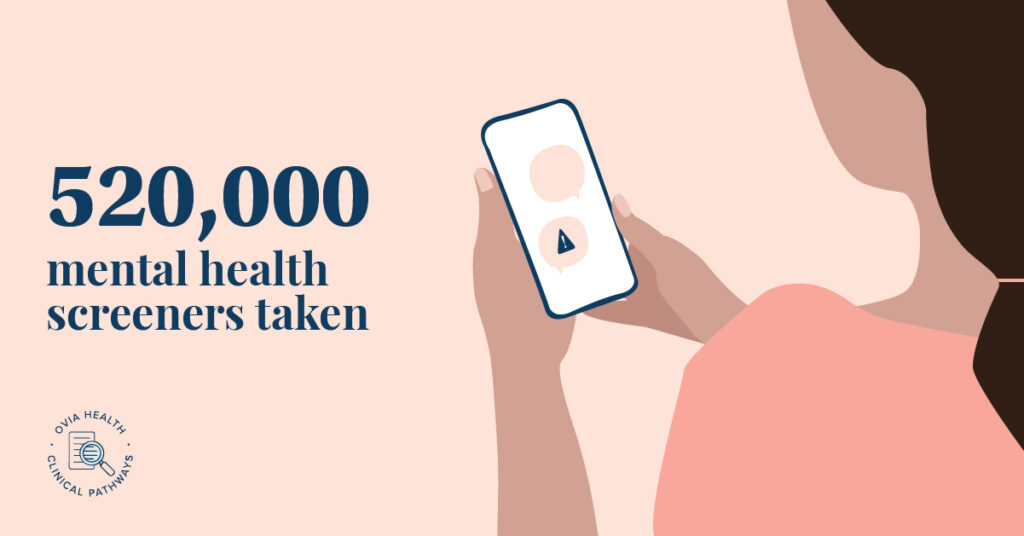 Clinical Pathways is a new series on the Ovia Health blog highlighting the research conducted by our clinical team. In this article, we explore perinatal depression and parental mental health.

Led by Dr. Adam Wolfberg — practicing OB/GYN, Maternal Fetal Medicine specialist, and Chief Medical Officer of Ovia Health — the Ovia Health clinical team has made important contributions to further the fields of women’s health and reproductive science. They have published manuscripts in the leading fertility and maternal health academic journals and presented their research at 22 conferences, including the American College of Obstetricians and Gynecologists (ACOG) and the American Society for Reproductive Medicine (ASRM). This study examines parental mental health and perinatal depression rates.

* The total number of screeners taken exceeds 520,000 — this is the total taken in just one year.

Mental health is under-researched and often overlooked, this is especially true for women who are pregnant or postpartum. To address this gap in care and provide support for under-served populations, the Ovia Health clinical team has made mental health research a top priority. They’ve studied the ways mental health uniquely impacts women on the parenthood journey, factors that affect a woman’s risk of developing perinatal depression, and the role digital tools can play to fill in gaps in mental health screening and support.

In May of 2019, the team shared some of their findings at the American Psychiatric Association’s annual conference, with a presentation titled Risk of perinatal depression among women screened within a mobile application. By delivering validated clinical screeners (i.e., PHQ-9 and EPDS) through the Ovia Health mobile solution, the clinical team discovered an incidence rate of perinatal depression that is nearly three times the rate cited by the CDC.

The research and findings

This study aimed to identify when depressive symptoms most often occur during the perinatal period. Ovia Health administered a perinatal depression screener (the Edinburgh Postnatal Depression Scale) to users of Ovia Pregnancy and Ovia Parenting.

The screener was delivered five times between April 2017 and May 2018 — twice during pregnancy and three times in the first year after birth. A total of 202,948 women took the EPDS screener during this time — 164,237 (81%) of women elected to take it once, and 38,711 (19%) elected to take it at least twice. Among the women who took it once, 47.6% scored greater than or equal to 10 on the scale, which indicates symptoms of depression. Among women who took the screener more than once, 79.5% resulted in the same score; 10.6% scored higher — showing more signs of depression; and 9.3% scored lower — showing fewer signs of depression.

Our clinical team concluded that EPDS scores were lowest during the three months following delivery, which is typically the only time most women are screened for perinatal depression. They also concluded that fluctuation in depressive symptoms is common, meaning that earlier and more frequent screening may help identify more women with depressive symptoms at a time when early intervention and disease avoidance is possible.

Why this is so important

Patients are falling through the cracks due to insufficient screening, and more women are suffering from perinatal depression than previously thought. By increasing screening and making it more accessible through a digital solution, our clinical team was able to detect a 29% incidence rate of depression — nearly triple the rate cited by the CDC (11.5%). This is an important first step for those with perinatal depression to find resources, support, and treatment.

Our health solution includes robust screening tools — both the EPDS and the nine-question Patient Health Questionnaire (PHQ-9) — deployed at many points throughout the reproductive health journey.

We also offer members a curated library of content dedicated to normalizing and de-stigmatizing perinatal mental health. Depending on screener scores, women are granted access to additional customized content. This content includes information about how to identify signs and symptoms of perinatal mood disorders, understand available treatment, and access care, including through Ovia Health coaches.

For a glimpse into the impact of our solution: between August 2018 and August 2019, members completed over half a million EPDS and PHQ-9 screeners in the Ovia apps and read millions of pieces of educational content each month.

Mental health is a hugely important facet of women’s health. Ovia Health’s clinical team is continuing to identify women at risk; normalize, de-stigmatize, and educate on issues of perinatal mental health; and provide women with the resources they need. The clinical team’s research is shining a light on how digital solutions can improve health outcomes, reduce healthcare costs, and support women and parents as they grow their families alongside their careers.

Ovia Health has helped over 14 million women and families. We offer a comprehensive maternity and family benefits solution from preconception and pregnancy through return-to-work and parenthood.